False World Explanation:  19 Islamic Fundamentalist terrorists led by Islamic terrorist Mastermind Osama Bin Laden planned and carried out a brilliant attack against the United States of America to punish it for its sins in the middle east and because they hate us for our freedoms.  Four planes were hijacked and used in this attack against America.  Two of the planes crashed into WTC 1 and WTC 2, causing each of the twin towers to collapse.  One plane crashed into a section of the Pentagon.  The fourth plane was heading toward Washington D.C. to possibly crash into the White House before the brave passengers aboard that plane said "Let's Roll" and stormed the cockpit, causing the plane to crash in Shanksville, PA with no survivors.  All the passengers on all four planes died as well as all the innocent victims in WTC 1 and WTC 2 when they collapsed.  Some 3000 Americans died in this senseless attack on Ameica.

Real World Explanation:  9-11 was a long planned Zionist Psyop that centered around the twin towers of the WTC Complex in New York City.  The Twin towers were aging Asbestos-filled Albatrosses that, had they not been destroyed in a convenient "terrorist attack" would have cost many millions of dollars to safely demolish.  But the Snakes (many of whom are located in New York City) devised a way to demolish the towers for very little cost to them as well as to use them in a Psyop that would accomplish many agendas for them.  Osama Bin Laden, whoever he was, had nothing to do with 9-11.  He was the chosen patsy of the Psyop.  9-11 was not an attack on America of any kind.  It was a staged deception to make the American people believe that America had been attacked.  No planes were hijacked.  Whether actual planes were used to crash into WTC 1 or WTC 2 or not is debatable.  It is possible that real planes were used (which were not civilian airliners) and were flown by remote control into the towers as part of the deception.  Its also possible that no planes flew into the towers.  Whether planes flew into the towers or not is not important.  Either way, it was a deception and there was no attack.  The twin towers had been vacated at the time of their collapses and nobody actually died in the collapses.  No plane crashed into the Pentagon.  Its possible that a U.S. cruise missile was fired into a section of the Pentagon to cause the damage seen there but it is equally possible that all the damage seen was from pre-planted explosives.  In any case, it was a deception and no attack.  As for the plane that allegedly crashed in Shanksville, this too was a lie.  No plane was used.  No passengers on the four alleged hijacked civilian airliners died in this.  Also nobody in the twin towers died in these false attacks.  The twin towers had been vacated at the time they were purposely collapsed as part of the planned demolition of the entire WTC complex.
EDIT TO ADD:
Faked Deaths
The following people are known to have existed before 9-11-2001 and are alleged to have died during 9-11-2001 but I say that none of these people died in the 9-11 PSYOP.  Either they did not die in reality or if they died, they did not die the way they were alleged to have died but due to some other cause.
Barbara Olson: 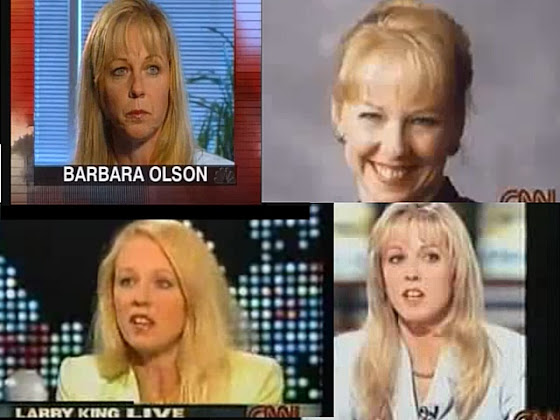 This woman may have had facial reconstructive surgery to reappear as a different identify after 9-11, Lady Booth.  Both Barbara Olson and Lady Booth were married to the same man, Ted Olson.
Lady Booth (shown on right): 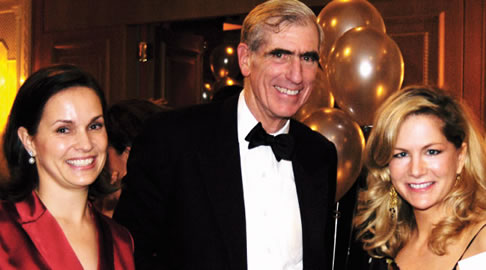 Additional Links:
A very strange and bizarre 9-11 ceremony
Posted by No longer a Trump supporter at 9:35 AM