Now that I have introduced the concept of The Two Worlds Paradigm it is time to give some specific real world examples of it, starting with the JFK Assassination.

False World official explanation:  Lee Harvey Oswald, a lone nut wanna-be Communist shot JFK from the sixth floor of the Texas School Book Depository.  He acted completely alone to kill the President.  Jackie Kennedy, the wife of JFK, was an innocent victim of Oswald's insanity and rage against JFK.  The U.S. Secret Service did everything it could to protect the President.  The CIA and the rest of the U.S. Government was not involved in any way with the assassination.  It was all Oswald and nothing but Oswald.  He was the only bad guy in the JFK assassination but fortunately for the world Jack Ruby got justice by assassinating Oswald.  Killer dead. Case closed.  Abraham Zapruder, a Jew, just happened to be set up in the perfect position to capture the moment when JFK was fatally shot in the head. The assassination was a complete surprise and shock to everyone.  Nobody expected it to happen.  Texas Governor John Connally was an innocent victim of one of Oswald's bullets, who was badly injured by it and almost bled out in the Hospital.

Real World explanation: Jackie Kennedy, the President's wife and a Jew, assassinated her own husband in the back seat of the Limousine by pressing a small concealed weapon underneath JFK's left cheekbone and firing it at point Blank range.  The U.S. Secret Service purposely stood down and allowed JFK to be assassinated by his wife.  The CIA was very heavily involved in the assassination.  Other parts of the U.S. Government were involved in the assassination. Abraham Zapruder, a Jew, was set up with his camera in advance to capture Jackie's assassination.  Zapruder knew about the assassination in advance and he was located with his camera where he was to capture it. Many people knew about the assassination in advance including LBJ, people on the ground at the scene, and everyone inside of the Limousine.  The only person inside the Limousine who did not know what was going to happen was JFK himself.  Texas Governor John Connally staged being wounded to give the impression that bullets were being fired into the Limousine from outside.  In reality John Connally was not wounded at all but was a direct co-conspirator in the assassination who was working with Jackie to kill the President.  In the Zapruder film, Connally can be seen conversing with Jackie just before she killed her husband. John Connally was a Zionist.

I can only speculate about the primary reason JFK was assassinated but in my opinion it was triggered by JFK's insistence that Israel not be allowed to acquire nuclear weapons.  Israel was very determined to acquire nuclear weapons (which they later did).  IMO Israel was behind the assassination of JFK but a lot of people in America (primarily Jews and their minions) assisted in the assassination.

Note: There are some who will say that the Zapruder film has been so altered or corrupted from its original form that nothing reliable can be determined from it but this is simply disinformation to discredit the only piece of real evidence we have about the JFK Assassination.  Although the Zapruder film has undoubtedly been altered by removing frames at various points, it is still an extremely important piece of evidence that shows that Jackie was the assassin of her husband for anyone with eyes to see.

Jackie about to pull the trigger: 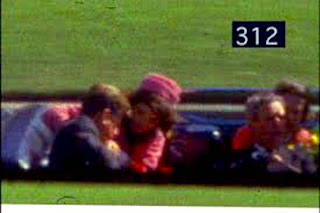 Click on the below gif to watch Jackie assassinate JFK:

Note:  A disinformation campaign has been created by the Snakes around the Driver of the Limousine, U.S. Secret Service Agent William Greer.  "The Driver did it" is a Conspiracy Theory that the Snakes use to discredit anyone who says they see Jackie killing JFK in the Zapruder film.  William Greer was not an innocent man in the JFK assassination.  He knew the assassination was going to happen and he slowed the Limousine at a predesignated spot where Jackie did the assassination and Abraham Zapruder filmed it but the driver did not shoot JFK.  Many Shills have come forward to promote "the driver did it", including Bill Cooper. Bill Cooper was controlled opposition.

Note:  A disinformation campaign has been created by the Snakes to say that the entire assassination was a Hoax.  This is a lie.  The assassination was no hoax.  JFK was brutally murdered by his wife just as you see in the above gif.

Here are five significant dates that directly relate to the JFK assassination:

June 26, 1963: Israel Prime Minister David Ben-Gurion resigns to prevent being served papers by JFK that would allow the U.S. inspection of the Israeli nuclear facility at Dimona.  This was a delaying tactic.

July 1963:  The new Israeli Prime Minister Levi Eshkol is served the same papers by JFK (that caused the Ben-Gurion resignation) demanding that the U.S. be allowed to inspect the Israeli nuclear facility at Dimona.  According to JFK, U.S. support for Israel would be “seriously jeopardized” if the U.S. could not get information on doings at the facility.  This caused a crisis in Israel which initiated the plot to assassinate JFK to replace him with a Zionist (LBJ) who would allow Israel to do whatever it wanted in terms of its nuclear program.

August. 1963:  Jackie Kennedy (a Jew) leaves the USA to go on an overseas trip to Turkey and Greece.

October 17, 1963:  Jackie Kennedy (a Jew) returns from her vacation in Turkey and Greece.

November 22, 1963:  Jackie Kennedy (a Jew) assassinates JFK. Complicit in the assassination are the CIA, the Mossad, the U.S. Secret Service, LBJ and many other Zionists inside and outside of the U.S. Government.

Jews killed JFK because he was preventing Israel from developing nuclear weapons.  The JFK assassination was an act of pure Jewish treachery and evil. Every American citizen needs to know who really killed their President and why he was killed.  Its not what they told you.

The JFK assassination was an act of Jewish treachery.  Its purpose was to remove a U.S. President who opposed Jewish will and to replace him with a Zionist puppet (LBJ) who would not oppose Jewish will.  The main reason for the assassination was JFK's opposition to the Israeli nuclear program. The JFK assassination was a Jewish coup to assume full control over the United States Government and they used murder and deception to get it.  And then they honored the man they had just murdered with a huge elaborate State funeral.
Supplemental Information
EDIT TO ADD:
There are times I have suspected that Jews always planned to kill JFK but I do not believe this.  JFK was complying with the Jewish interests in many ways as POTUS.  For example, he portrayed the "moon race" was legitimate to the American people when he had to have known that it was technologically impossible for the U.S. to send men to the moon.  JFK was backing a simulated moon landing, so he was not honest in this area at least.  But what I believe is that JFK did something that was unanticipated by his Jewish masters that forced his removal as POTUS.  What I say is the primary reason behind the assassination is JFK's insistence that Israel not be allowed to develop nuclear weapons at its Dimona facility. A secondary reason is JFK's animosity toward the Central Intelligence Agency and his clear intent to limit the power of the CIA.  Since it is my contention that the CIA is nothing more than the U.S. branch of the Mossad, by going against the CIA, JFK was going against the Jewish interests.  JFK's opposition to elements of the Jewish Master Plan meant that JFK had to be replaced by a Zionist lackey who would do whatever the Jews wanted, including allowing the Jews to attack a U.S. ship without any reprisals.  LBJ was the perfect Jewish lackey to replace JFK.
EDIT TO ADD:
What Else the Zapruder Film Shows

Posted by No longer a Trump supporter at 9:43 AM