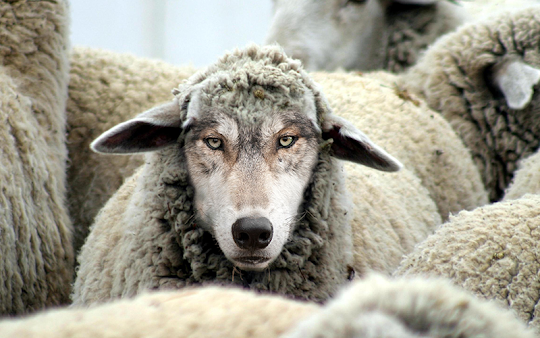 This is my word of the day to those who would know the truth.  This world is full of deception and illusion from top to bottom and in this world there are many deceivers.  Some of the most believable deceivers are those who pretend to be sheep telling the truth when in reality they are wolves in disguise who are in the employ of the bad guys to lead you away from the truth to whatever lie they want you to believe in.  You as a truth seeker must always look these Trojan horses in the mouth with the up front suspicion and knowledge that the enemy is going to send many such deceivers your way to misguide you, to confuse you with carefully crafted lies, to prevent you from knowing the forbidden truth about the Jewish snakes who really run this world.  Its your responsibility not to be deceived by them.  A perfect example of a wolf in sheep's clothing or Trojan horse whistle blower is Edward Snowden. Another person who is in the news lately that I suspect of being a Trojan horse whistle blower is John McAfee, who allegedly recently died in a Spanish prison.  I tell you that you cannot trust this man to be genuine.  He is more than likely a PSYOP.  It is not the influential people such as John McAfee who are the true whistleblowers.  It is the nobodies of the world who are the whistleblowers. I just want you to have your shields up at all times to deception and deceivers.  Expect the enemy to send many deceivers to try to get you to believe a lie, because this is the standard M.O. of the Jewish deceiver.  You must not allow yourself to believe a lie because once you do then you are lost to the truth.  You have been warned.

Additionally, many web sites that appear to be honest out themselves as disinformation web sites by endorsing disinformation agents such as Alex Jones, QAnon, Donald Trump and many others.  You must know that the snakes are everywhere endorsing their own agents.  Really you must be aware of this.  When you see a web site endorse a snake then you are on a snake web site.

EDIT TO ADD:  I have another proof even today that he is, which is a tweet by John McAfee implying Jeffrey Epstein was murdered. You have to understand that the enemy we face is very clever.  Its not dumb.  Its very devious and cunning.  It NEVER relies on a single story to deceive but instead it relies on many levels of deception to deceive.  Those who are not fooled by the top level of deception are very likely going to be fooled by a deeper layer of deception.  All those who are fooled by the likes of Edward Snowden and Isaac Kappy and John McAfee and so many others have not really understood the Two Worlds Paradigm at all.   The most important thing to know from the Two Worlds Paradigm is that the truth is never want they want you believe it is.  The truth is what they do not want you even to suspect.  So when you see many people come forward suddenly to present a "popular" alternative" explanation to a main stream media narrative,  this should be a giant red flag to you that you are seeing a very clever disinformation campaign.  Allow me to use Jeffrey Epstein as a case in point, in the following paragraph to elucidate what I am trying to say.

EDIT TO ADD:  I realized I mixed up my Johns in this post which I have corrected.  For clarification, it is John McAfee, the one who is alleged to have recently died in Spain that I am alleging to be a disinformation agent, not John Kaminski.  I see John Kaminski as honest  I apologize for this mistake in my post which was really just a typo on my part.  I did not intend to slander John Kaminski as dishonest.  I am very sorry for making this mistake that I see offended some viewers of my Blog but this was unintentional.

EDIT TO ADD:  Is it possible that John McAfee faked his death?  Absolutely.  I am not saying his death was faked but since I see the man as a disinformation agent his death very well may have been faked.  John McAfee could have been a Jewish PSYOP as so many other high profile people are and it is very common for deaths of these agents to be faked or staged when their PSYOP comes to and end. .

Posted by No longer a Trump supporter at 10:41 AM