I have never documented the exact sequence of events of the JFK assassination as I have been able to determine by a careful observation of the Abraham Zapruder film but I think I should.  For whatever reason, it has fallen to me (of all people) to do this, since nobody else in the world seems to care about it as much as I do.  FYI My only interest is that the truth be known, even if that truth is a forbidden one because society has chosen to deny it and to advocate a complete falsehood as the truth.  I am one person here to set the record straight as I see it.  I believe it is my responsibility to do this.  This is the story that apparently nobody else is telling.  I have included the Zapruder film frame numbers for each step of the sequence for you to reference.  Click on the below link to download a zip file of the Zapruder film frames to your device for reference purposes. 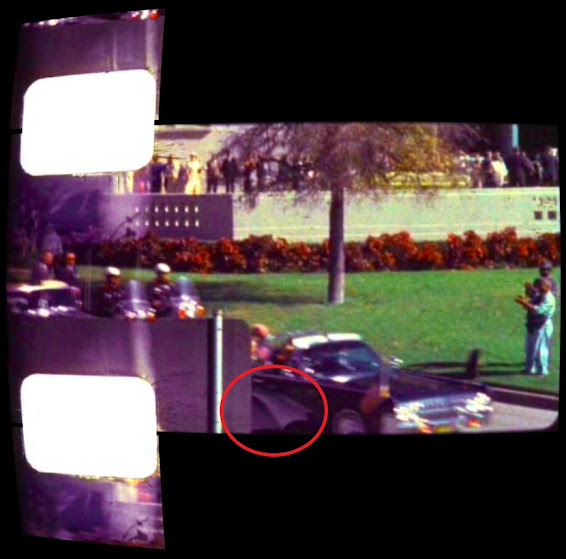 The man commonly known as the Umbrella Man positions himself in front of the Stemmons freeway sign that he knows in advance that the Presidential Limousine will pass very close to his position.  The Umbrella man is a CIA/Mossad agent and the Umbrella he carries is a CIA/Mossad created weapon that fires a small dart or flanchette coated with a fast acting toxin to immobilize the target.  See below diagram. 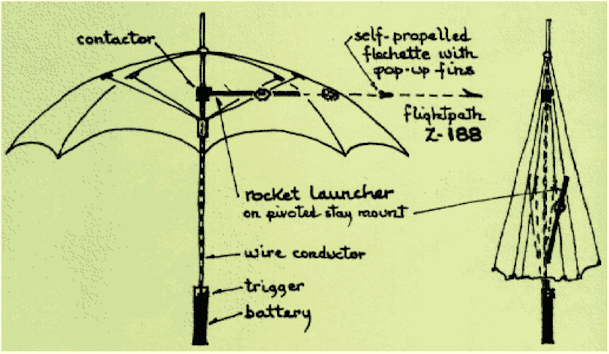 The Umbrella can be aimed so it can accurately fire the projectile as long as the target in close by. It is unknown to me when he positioned himself in front of the Stemmons freeway sign but it was before the Limo reached the sign.

Zapruder footage before the Assassination Sequence 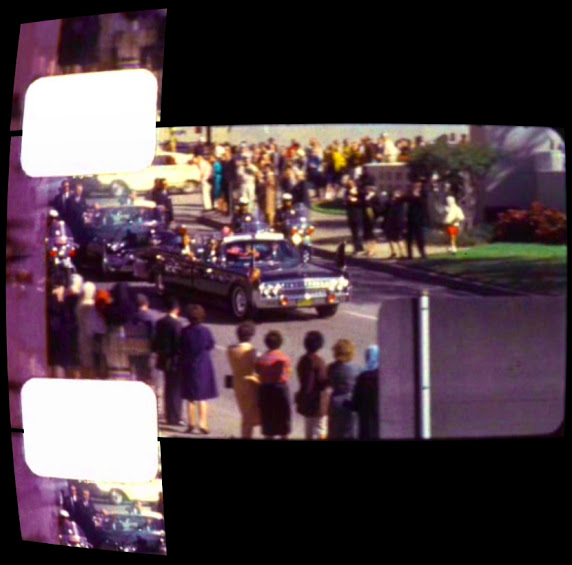 Frames 1-210:  Pre Assassination Sequence footage before JFK disappears from sight behind the Stemmons Freeway sign. Besides JFK, the following people are riding in the Presidential Limousine:

Sitting in the front seat are two U.S. Service Agents.  Both are complicit in the assassination.  Both knew of the assassination in advance and did nothing at all to protect the POTUS.  They are co-conspirators. 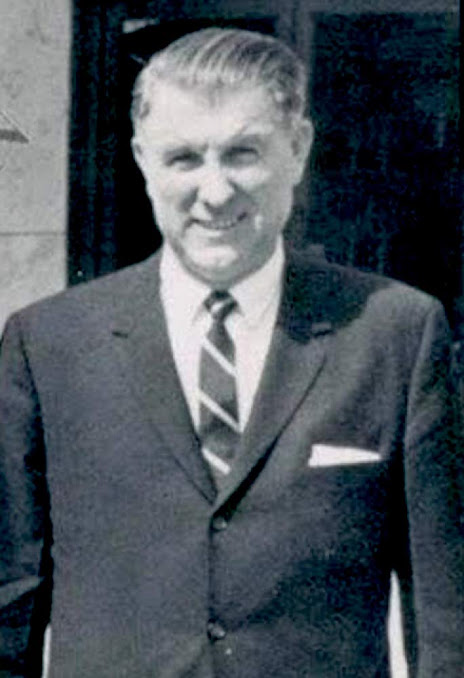 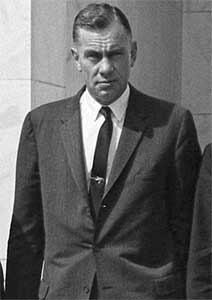 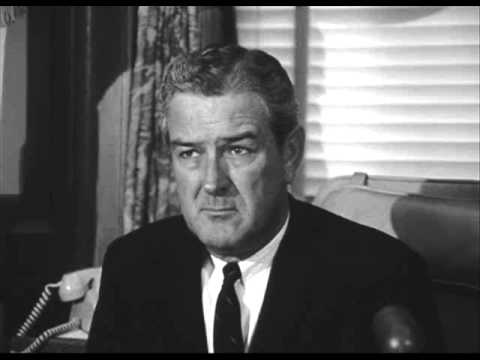 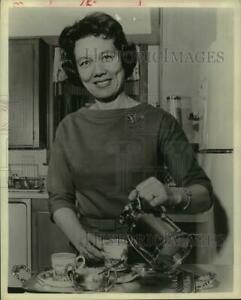 In the back seat sitting beside the POTUS was his wife Jackie Kennedy, the unlikely assassin: 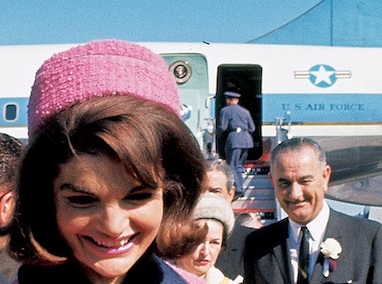 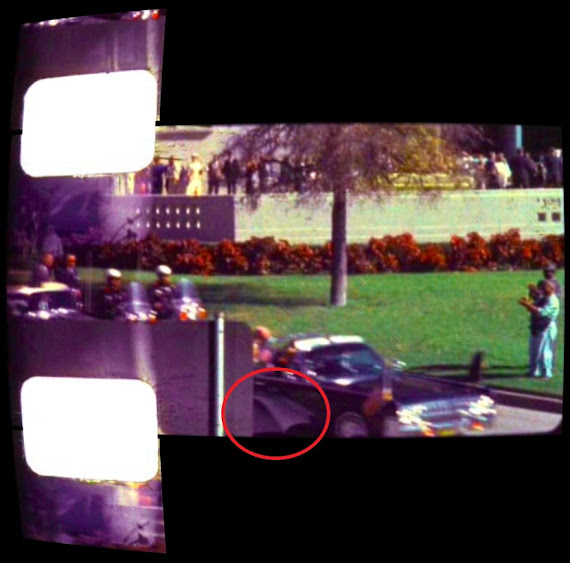 Frames 211-219: The Presidential Limo drives by the Umbrella man standing just in front of the Stemmons freeway sign.  The President is sitting on the right in the back seat, so he is closest to the Umbrella man.  The President is approximately ten feet way from the Umbrella man when the dart is fired directly into the front middle of his neck.  Before it was fired, the umbrella can be seen rotating as the Limousine passes (watch the Zapruder film to see it) showing it is being aimed as the Limo is passing. All that is visible in the Zapruder film is the right most portion of the umbrella sticking out from behind the sign but its enough to see the rotation.  The President is not visible (hidden behind the Stemmons freeway sign) when the projectile is fired into the front middle of his throat.

Additionally please notice that Jackie's attention is on her husband immediately after JFK becomes visible from behind the Stemmons freeway sign, showing she is fully aware that he has been shot in the throat.  But notice in the following frames that she makes no attempt to help him.  She sits like a black widow spider waiting until the toxin has taken effect before she leans over to him to make the killing head shot.

JFK Holding both hands up to throat area 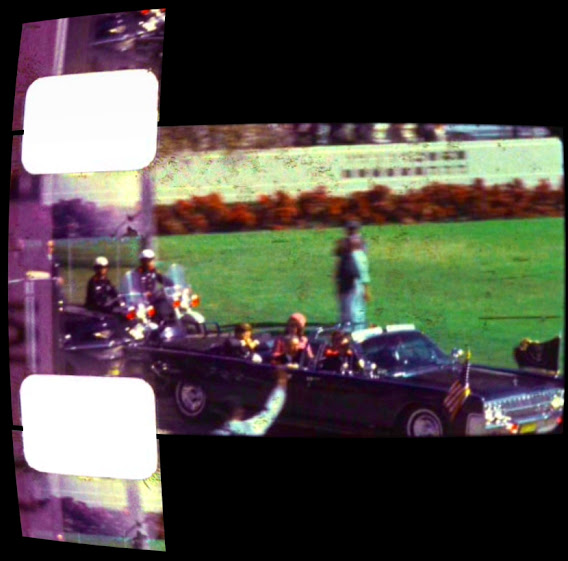 Frames 225 - 240:: The back of the Limo comes out from behind the Stemmons freeway sign. JFK is holding both hands to his neck, where he has been (to him expectantly) shot.  Notice that Jackie is watching him but making no effort to assist her husband.  Notice that John Connally is looking straight ahead. 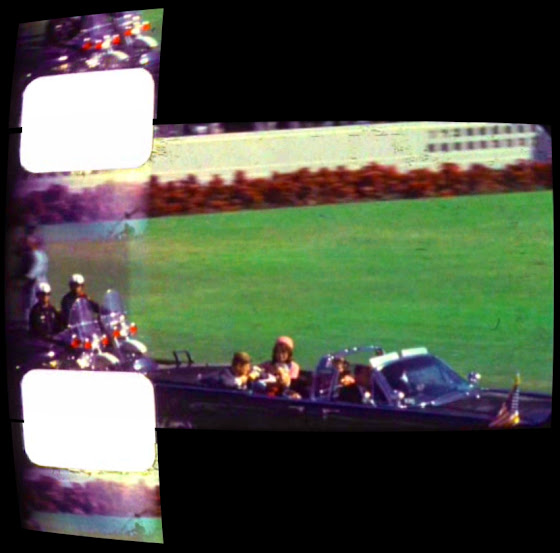 Frame 240 -  257: He holds his hands to his neck for awhile until the immobilizing agent subdues him.  He eventually becomes strangely passive and docile, which is the effect of the quick acting agent.  Jackie's attention has been on JFK since the Limo came out from behind the Stemmons freeway sign but now her attention turns to John Connally, who is starting to turn his head back to look at the President. 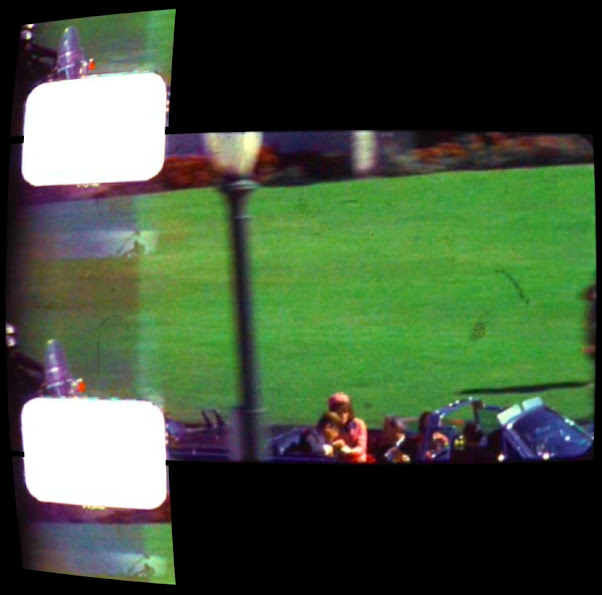 Frames 260-290:  John Connally, sitting in the seat in front of JFK turns around and ensures that the President is immobilized before giving Jackie the okay to perform the assassination.  Jackie's attention remains on John Connally. Frame 291 - 295: Jackie, who has been waiting for this preplanned cue, begins to turn her attention back to her husband to do the actual assassination.

Preparation for the Head Shot 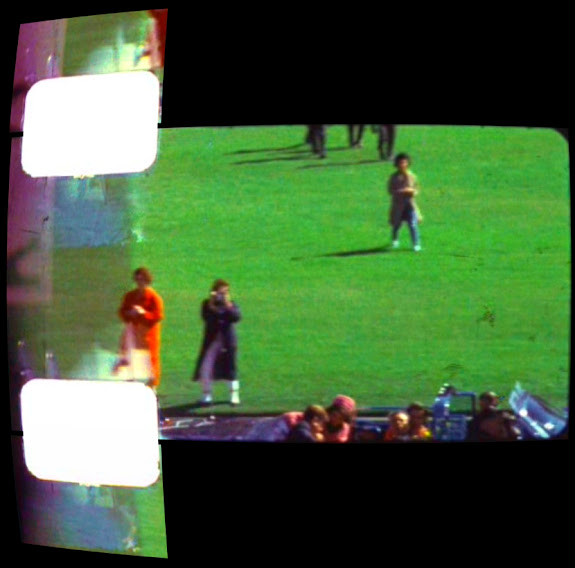 Frames 295-312:  Jackie leans over next to her husband. In her right hand she holds a weapon.  This weapon is specially created CIA/Mossad weapon.  Its very small but powerful enough to easily kill someone when fired at point blank range.  It fires one shot and is designed to be fired at point blank range, with the barrel held to the head of victim.   Notice in the above image the visible portion of her right arm, which shows her arm is bent at the elbow, indicating she has positioned her right hand somewhere below the left side of JFK's head. Jackie, who has been previously trained how to do this, places the end of the weapon underneath JFK's left cheekbone aimed up and at a slight vertical angle. She holds the the front of the President's chest as she prepares to pull the trigger. 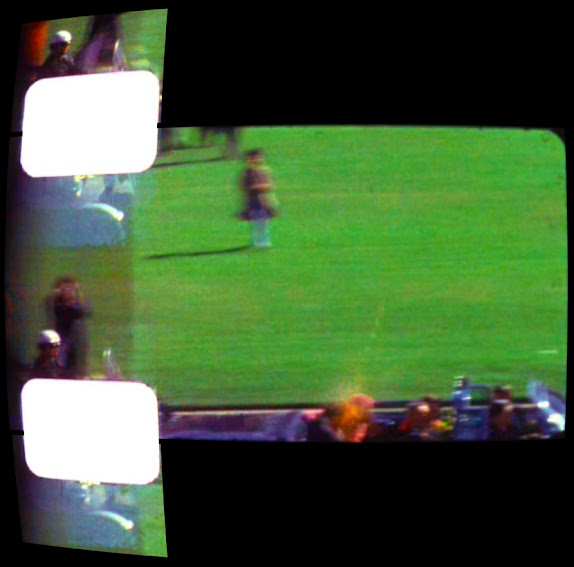 Frame 313:  The infamous head shot frame.  By the time of the frame, the projectile has travelled from the barrel of the weapon (held in Jackie's right hand) pressed underneath his left cheekbone, up through his brain, exited the top right part of his head, and has travelled up in the air at an angle some distance.  The path of the projectile is visible in the frame. 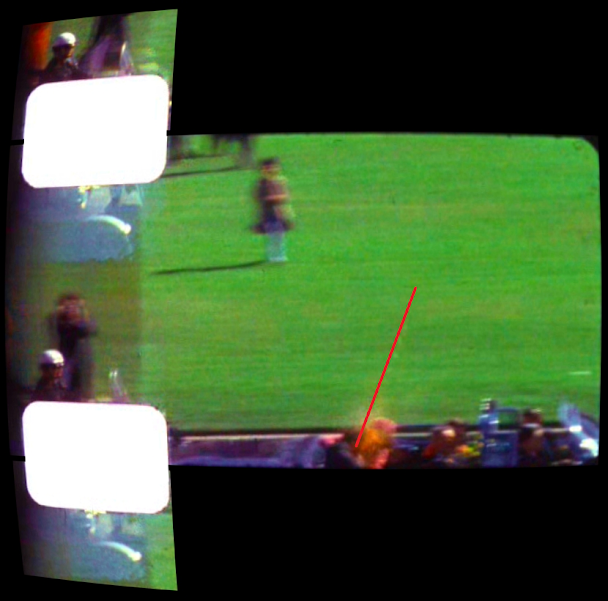 Frames 313-314:  A path tracing the path of the projectile as it exited the top of JFK's head can clearly be seen in these frames.  The path of fire was upward and at an angle.  The blood splatter is upward, following the same path as the exiting projectile.  In the above image, I have drawn a red line to show the projectile path up in the air.  Follow that path to its origin and it leads to the barrel of the weapon held in Jackie's right hand. 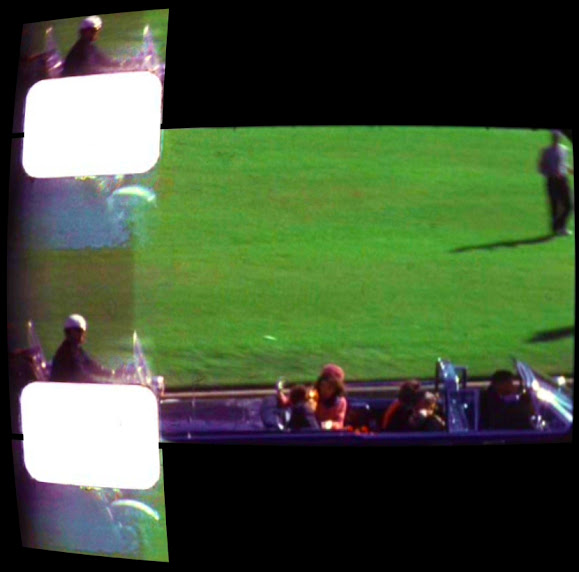 Frames 324-326:  Jackie raises her right hand and tosses the murder weapon up in the air behind her.  Notice two things.  One is that entire frames have been removed from the Zapruder film at this point to hide the weapon Jackie is tossing.  This is evidenced by the unnatural speed at which he right forearm is raised.  The second thing is that the white blob is in the perfect position to conceal the murder weapon as it reaches the near apex of its vertical ascent.

Watch the below GIF until you can verify the actions of Jackie just before and as she fires the weapon: 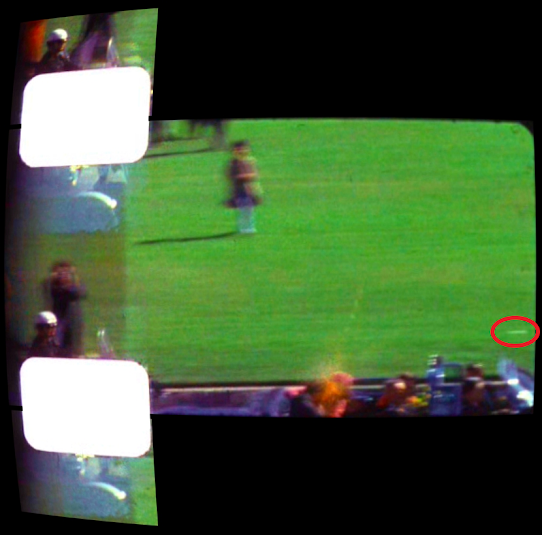 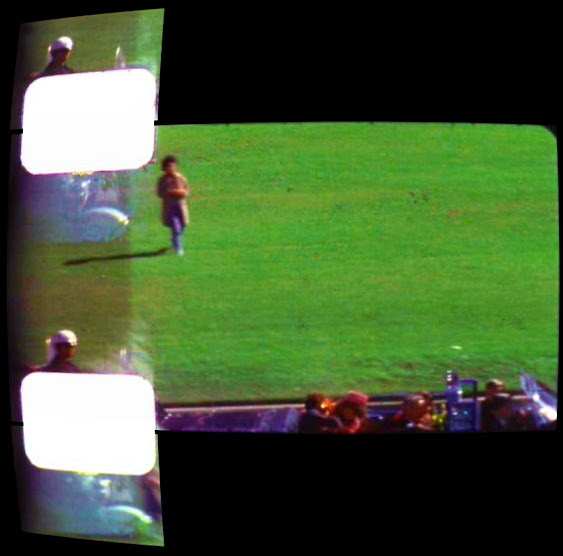 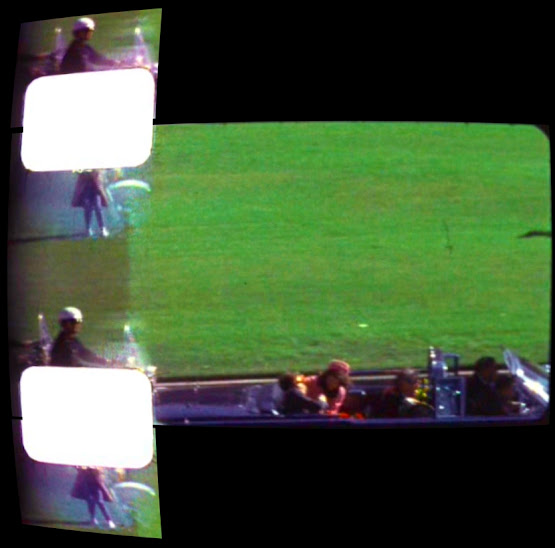 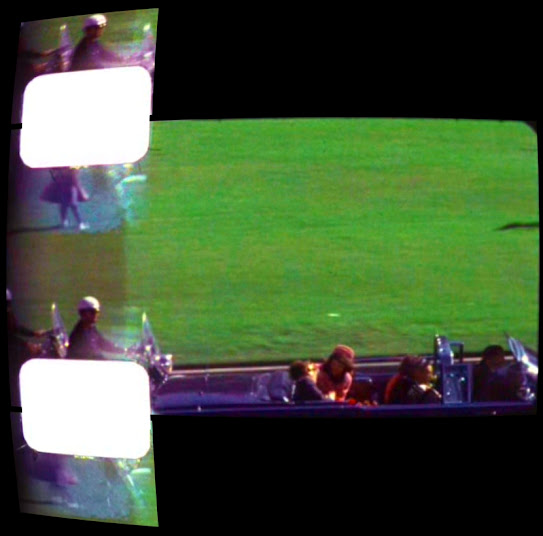 Frame 313:  A blur appears in the lower right part of the frame.  It is circled in red in the above image.  In subsequent frames it appears as a white blob that looks like it is something on the grass outside of the Limousine.  It appears to be of no relevance whatsoever, however it is significant.  Instead of being an insignificant background item, it has been drawn onto the film frame by frame.  The Blob was drawn onto the film post assassination and before the film was released to the public. At a later point in the film, the purpose of this drawn on blob will become apparent.

More info on the White Blob:

Although it is a post-assassination edit of the Zapruder film, I feel it is important for viewers to understand what this is.  It is not, as it appears something on the grass beyond the Limo but is instead something that has been drawn onto the film frame by frame, beginning (uncoincidentally) with the head shot frame, 313.  To see that the Blob is artificial and not part of the original film, watch the Zapruder film and keep your eyes on the way the blob moves from frame to frame.  It does not move as expected, even considering the motion of the hand-held Zapruder camera. In an earlier post of this Blog I did a detailed analysis of this white blob and that its not a natural feature.  The most astounding feature of it is that this "white blob on the grass" leaves a visible reflection on the trunk of the Limousine, which is impossible.  So I figured out the trick and as you will see, the conspirators reveal the reason behind it with this edit.  Its a trick to hide the murder weapon as it was discarded by Jackie immediately after the assassination.  See the following link for more information on this mysterious white blob and its purpose:

Here is a concise summary of the purpose of the white Blob:

Here is something I figured out:  There was no logical reason for Jackie to throw the murder weapon.  It cannot have been part of the plan for her to do that.  If they were trying to be inconspicuous, then throwing the murder weapon on the trunk, where it then had to be retrieved (by Secret Service Agent Clint Hill), was very conspicuous and in fact it confirms that Jackie is the assassin because she gets rid of the weapon and they had to conceal this with a photographic trick.  What I surmise is that Jackie threw the weapon on instinct or perhaps because of the guilt and horror of what she was doing.  She was clearly not supposed to throw it but she did, so they had to use photo manipulation to hide and obscure it.  Had she not thrown the weapon but just hid it after the assassination then it would be much less obvious. 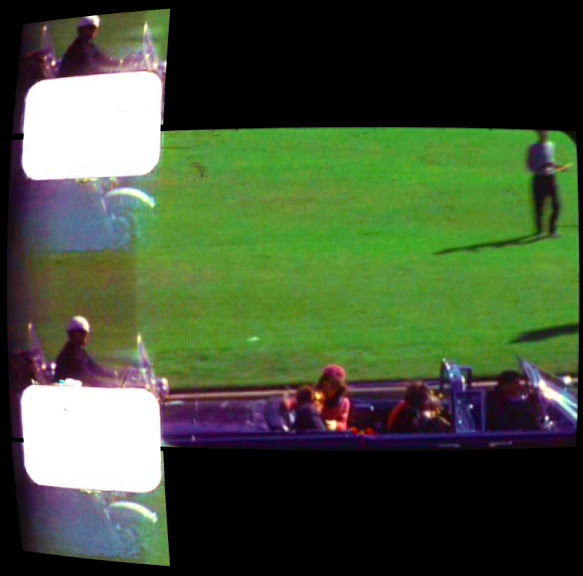 Frame 327: The projectile from the weapon was powerful enough to cause a large piece of JFK's skull in the upper right quadrant of his head to be open, but still be connected to his head. A portion of JFK's brain protrudes from this hole in his skull created by the projectile as it went through his head and exited out the top of his head.  There was very extensive damage to his brain.  The shot was likely immediately fatal despite the popular notion that JFK survived until he got to Parkland where he finally died.  He was dead on impact. 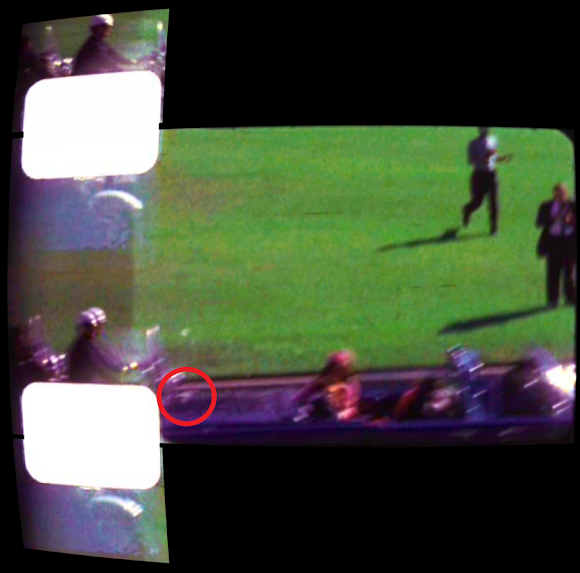 Frames 328 - 331:  The murder weapon thrown by Jackie lands on the trunk and ends up in left rear corner of the trunk, circled in red in the above image.
Clint Hill Retrieves the Weapon from the Trunk 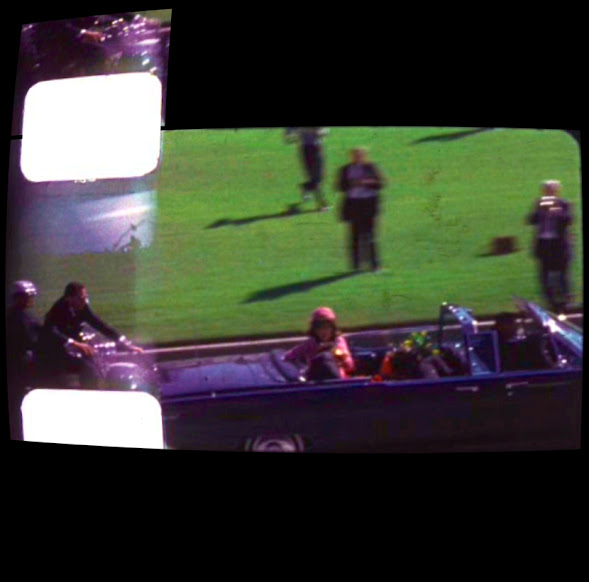 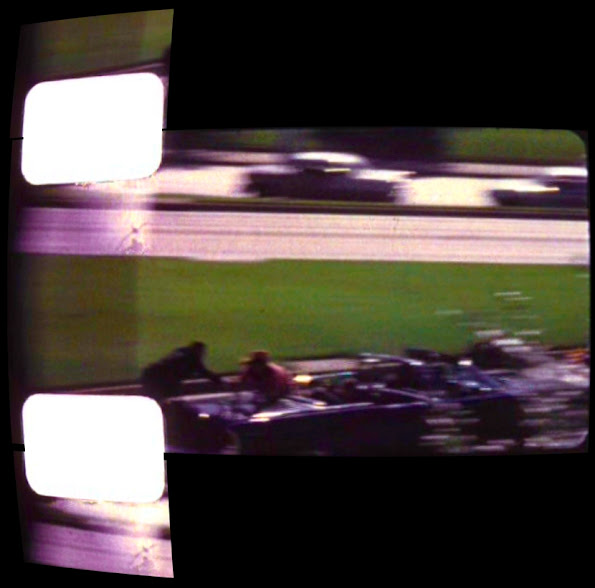 Frames 386-392: Clint Hill passes the retrieved weapon back to Jackie.
More to Come

If anyone has any questions about anything in this, please ask in the comments.  I welcome any question as long as it made respectfully.  Anyone who is interested in truth about the JFK assassination should at least be curious about what I saying, because I am offering to help you see the truth with your own eyes via the Zapruder film.  It is the Zapruder film itself that tells the real story about the JFK assassination, with the proper explanation provided to what you are seeing.

Posted by No longer a Trump supporter at 1:51 PM