How Jackie got rid of the weapon:

I have read from different sources that Jackie put the weapon she used to kill her husband in some type of hidden compartment behind her in the back seat of the Limo but this never made sense to me.  She did not have time to open any kind of secret compartment and place the weapon inside of it.  Somehow she got rid of the weapon very quickly in such a way that it is not apparent in the Zapruder film.  For the longest time I have been mystified by this.  While I am certain she killed her husband, I have never known how she got rid of the weapon so fast until now.  A very clever trick has been played to conceal the weapon and its not intuitive at all how they did it.  It must be shown to be understood.

Before I tell you how they concealed it, I want to answer the question of how Jackie got rid of the weapon.  And the answer is that she threw it out of her hand immediately after the assassination.  How, you may ask, could she have done that without it being visible in the Zapruder film?  And here is the trick that conceals it.  Its very ingenious and it had me fooled for the longest time until I realized what I was seeing.  Here is Frame 326 of the Zapruder film: 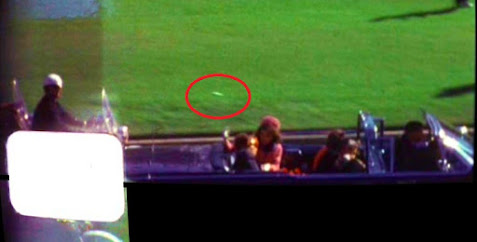 If you click on that image to see it better, what you will see is that there is a white blob in the background which appears to be something on the grass outside the Limo.  I had seen this white blob before when I was examining the Zapruder film in detail and I noticed then that there was something odd about it.  The white blob is first visible in Frame 313 which is the very same frame in which Jackie shoots JFK in the head. It continues until Frame 339.  It appears to be something on the grass outside of the Limo but there is something odd about it if you follow the Zapruder film frame by frame watching it.

For one thing it seems to change direction.  It does not seem to be consistent from frame to frame as one would expect if it were really on the grass outside the Limo.

The second thing and what was the give away to me about what it really is is Frame 326.  At the very moment when Jackie pulled her hand away that she just had a weapon in that killed her husband, this white blob is in the perfect position to conceal something being thrown up in the air out of her hand.  Coincidence you say?  That is too much of a coincidence.  Note that the white blob appeared in the film the instant Jackie pulled the trigger and then it was in the perfect spot to conceal the weapon being thrown out of her hand just as she pulled her hand away from JFK's head.

What is the trick that conceals the weapon?  This white blob is not an object on the grass outside of the Limo as it appears to be.  It has been drawn onto the film frame by frame to appear as if it is an object on the grass when in reality its purpose is to conceal the weapon Jackie is getting rid of immediately after the assassination when she pulls her hand up from JFK's head. The white blob in Frame 326 conceals the weapon behind it.  The size of the blob is the approximate size of the weapon but the shape of the weapon is completely concealed behind it on every frame of the film.

Do you see the trick?  They wanted to conceal Jackie getting rid of the weapon so they drew this blob onto the film in frame 326 and then they went backwards and forwards in the film to disguise what they did to make the Blob appear to be just a meaningless background feature.  Its a very ingenious way to hide something that they do not want the public to see.  While it appears to be a feature on the grass outside of the Limo, in reality it is obscuring Jackie throwing the weapon up in the air behind her.

As an experiment, I overlaid frames 326 and 327 in Photoshop to see how the blob changed at this very critical point: 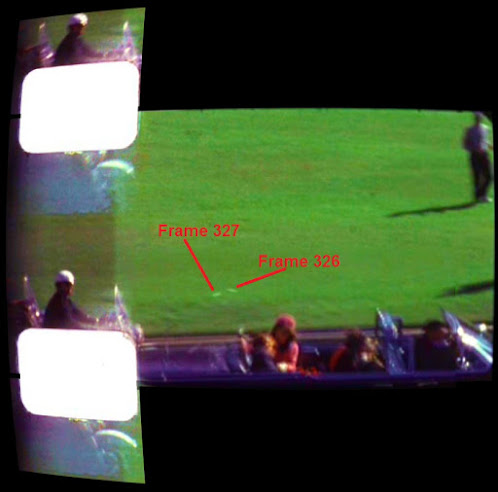 As we see the Blob does not stay at the same vertical position between these two frames.  Instead, it drops down exactly as one would expect an object to fall due to gravity that was thrown up in the air by Jackie.

Here is a test that anyone can do to verify that the Blob is concealing something in frames 326 and 327 that is dropping down due to gravity.  Please save the two frames together in a folder with nothing else in it: 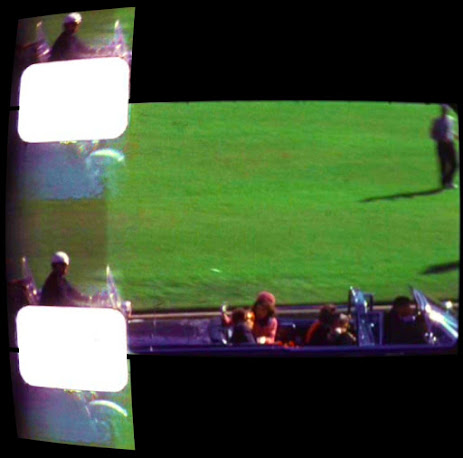 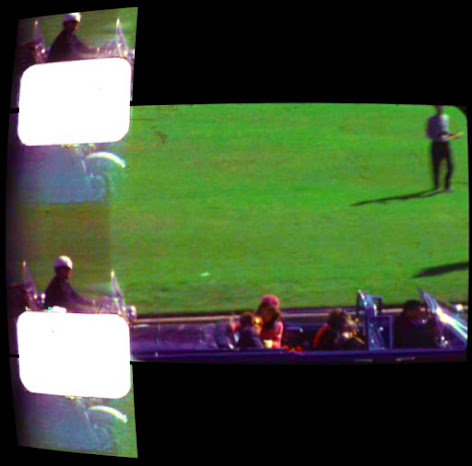 After saving these two images in a folder, open the images in an image viewer and flip between them and look at the change of position of the blob and the path it takes.  What you will find it is that it is going up in 326, it reaches its maximum height between the two frames and then it is going down in frame 327.  This is exactly what one would expect if something were thrown in the air.  It would go up, it would reach its peak height and then gravity would pull it down.  This is exactly what is seen in these two critical frames. Of course they could not maintain the illusion that the blob was a background feature if it kept dropping down so in frame 328 we see the Blob move back up higher.  In Frames 326 and 327 it was concealing the weapon.  In Frame 328 it is not.  The weapon in Frame 328 must be quite a bit lower than the blob.  With each successive frame gravity is going to pull the weapon down faster until it either drops below the edge to the Limo and disappears from sight or until it drops onto the trunk of the Limo. 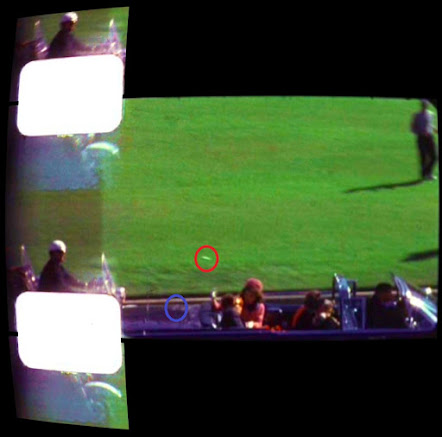 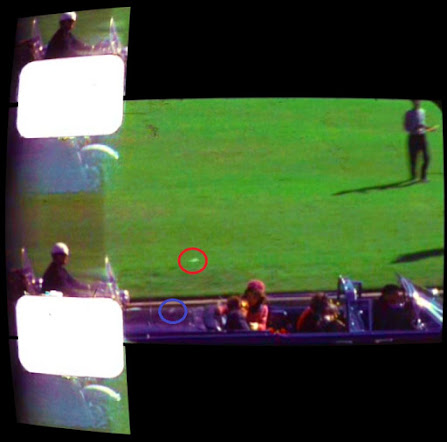 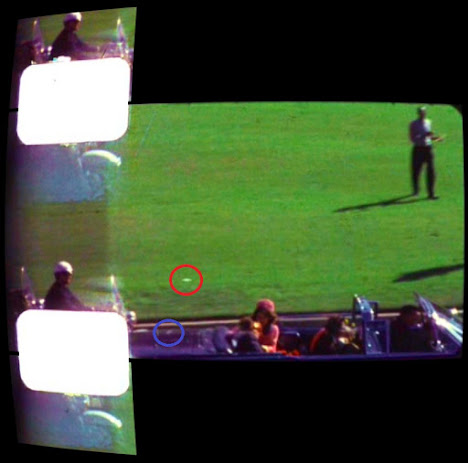 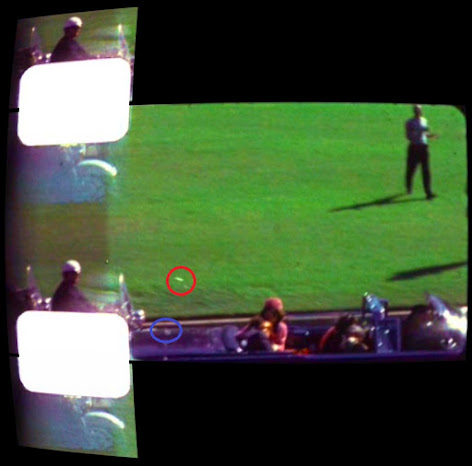 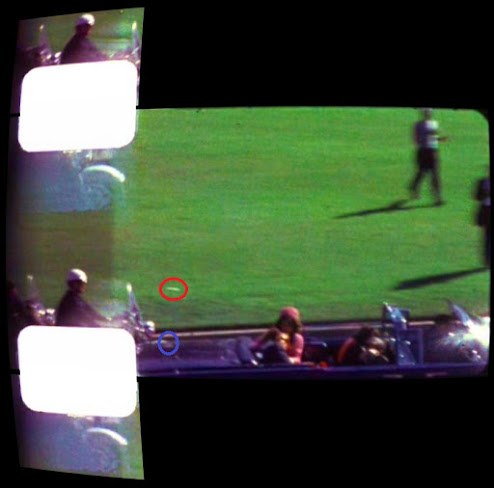 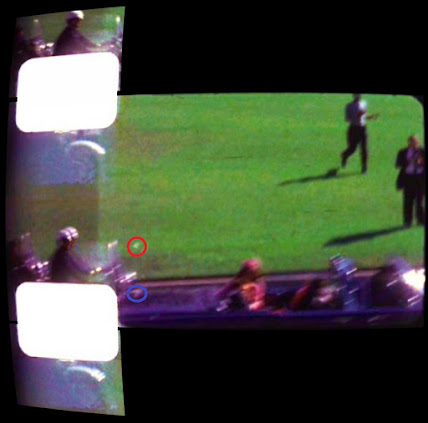 Notice that the Blob on the trunk does not match the Blob "on the grass" in shape or position.  What the Blob reflection on the trunk is obscuring is the reflection of the weapon that Jackie threw out of her hand.  And now we are getting to a really juicy part.  Where does the weapon go and who retrieves it?  The Zapruder film tells the entire story for anyone with eyes wide open to see it.

Who retrieved it?  Who jumped onto the LEFT BACK CORNER OF THE TRUNK where the weapon landed according to the Blob reflection and reached up to grab it?  It was U.S. Secret Service Agent Clint Hill. 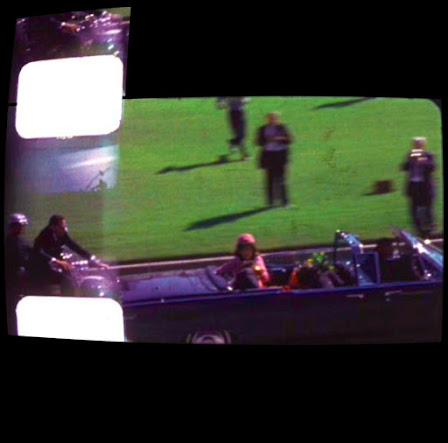 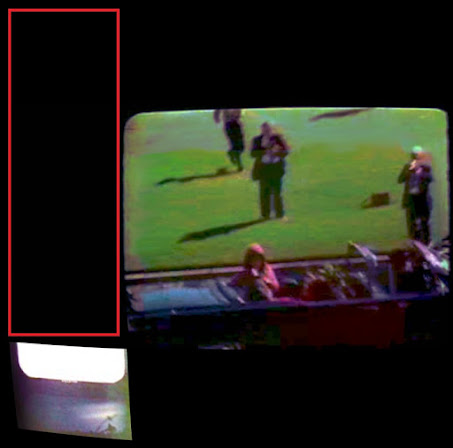 Or it was Jackie who retrieved it: 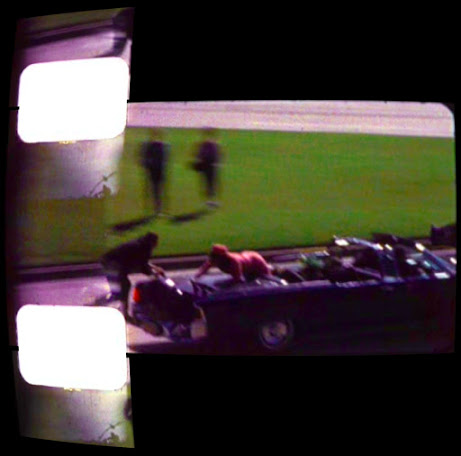 Either way, Jackie killed JFK and threw the weapon on the trunk afterwards and then either her or Clint Hill retrieved it.

Posted by No longer a Trump supporter at 11:18 AM