Why use Jackie to Kill JFK in Public?

In my previous post I said that Jackie killed JFK for Israel.  In the comments section of that post some questions got asked and I want to address those questions here in a new post to give everyone my best take on these questions.

Question:  Why not kill JFK in private, such as poisoning him or causing him to have a heart attack or a stroke or some other means?  Why kill him in public?

Answer: (((They))) wanted a patsy to blame the assassination on almost immediately after the assassination and they wanted the public to believe that this patsy was the assassin.  Had the assassination happened in private then nobody would know what happened. There would be a huge investigation to determine what really happened and this investigation would very likely reveal the conspiracy to kill JFK.  But with a patsy to blame the assassin on, everyone would know who killed JFK.  There would be no need for an investigation.  The patsy (Oswald) is guilty of killing JFK.  Case closed.  And if anyone doubts it, we will have our own government commission controlled by (((us))) that will say conclusively that Oswald killed JFK. The U.S. Government itself was complicit in the assassination and blaming everything on a patsy of their choosing.  So it had to happen in public so it could be immediately blamed on someone (((they))) wanted blamed and so that (((they))) could control the narrative with (((their))) main stream media.  "The President has been shot.  I repeat the President has been shot."  What they did before Oswald was even revealed was to tell the public that shots had been fired at the Limousine from outside the Limousine.  This is predictive programming to set the expectation in the minds of the American people that an assassin fired into the Limo from outside.  Nobody would ever suspect that the shot came from inside the Limo.

Question:  Why did they shoot JFK in the throat with a tranquilizer dart to immobilize him and then have Jackie finish him off with a bullet through the head?  Why not just kill him with a single shot in the head instead of this method?

Answer:  I can offer several reasons why they chose to do it this way but the answer that comes to me strongest is that (((they))) wanted a guaranteed kill of JFK with no chance of failure. Any other method of assassination they could have chosen has a chance of JFK escaping with his life.  Using any other method, he could be injured but still alive at the end of it.  This was not acceptable to the conspirators. (((They))) wanted JFK dead with zero chance of failure.  And upon examination of the method they chose I can say that there was no chance of JFK escaping alive.  Here is the two step method they chose:

Step one: A projectile coated with a fast acting toxin was fired into the front of JFK's throat from an umbrella disguised weapon that was very close to the Limousine as it passed in front of the Stemmons freeway sign.  This toxin immobilized JFK in approximately ten seconds from the time it entered his throat so that he was helpless.  He had to be helpless and unable to defend himself before Jackie could deliver the fatal head shot.  If you go through the frames of the Zapruder film you can see that the umbrella spins as the Limousine passes, showing it is being aimed directly at the President as he passes by.

The Umbrella Weapon close to the Limo that fired the dart: 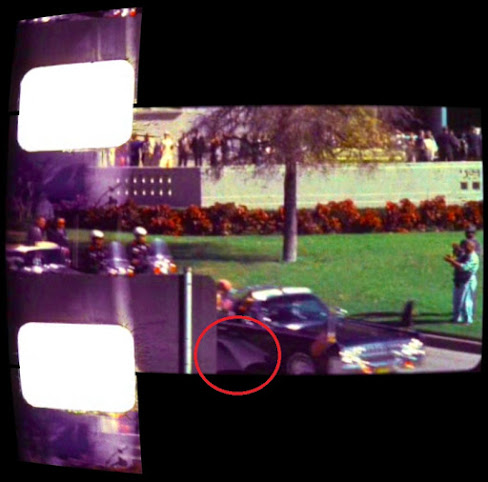 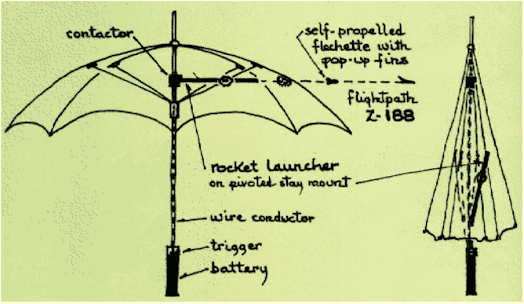 Step two: Now that JFK is immobilized, Jackie presses a small likely CIA or Mossad created weapon that fires a single shot up underneath JFK's left cheekbone and fires upwards at an angle.  This is an exploding type bullet meant to do the maximum amount of damage possible.  It travels up through JFK's skull and explodes the upper right front of his head open so his brain matter protruded out of the wound.  This shot was guaranteed to be fatal.  Regardless of the disinformation that says that JFK was still alive and died in the hospital, this shot was instantly fatal.  JFK was dead inside the Limo.

Guaranteed fatal assassination with no chance of JFK escaping death:

In case anyone is not clear, everyone inside the Limo except for JFK knew about the assassination in advance and was complicit in it.  JFK was set up and betrayed by everyone he trusted.  That is the definition of Treachery.

In a future post I will address the question: Why was the U.S. Government itself complicit in the assassination of the U.S. President?  This is a very important question to ask and the answer to it reveals who controlled the U.S. Government even as early as 1963.

Posted by No longer a Trump supporter at 7:40 AM