In my previous Blog entry I said that trying to understand 9-11 led me to an epiphany. This epiphany led to the creation of this Blog and is fundamental to everything in it.  It is the basis of the Two Worlds Paradigm that I introduced very early in this Blog.  Although I have tried to explain this epiphany using words on this Blog, no epiphany can be explained from the outside. Its an insight that you either have or you don't and cannot be explained directly.  It has to be realized from the inside to have any meaning. But there is something I can explain using words that can lead others to the same epiphany that I had, which is the following.

You have to see the Lie before you can see the Truth.  Lies reveal the truth. 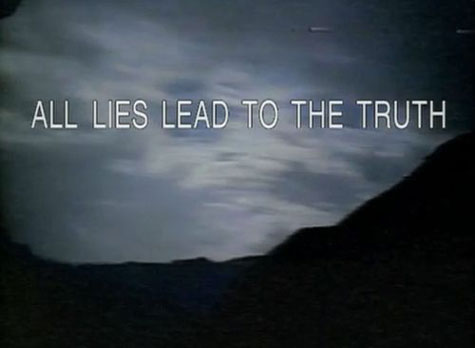 What is Truth?  It is very subjective.  Truth for one person is very often not the truth for someone else.  Truth can be anything.  But lies are not subjective.  If you discover that a lie has been told to you by someone you trust, then you know that there is a truth that is the opposite of the lie that you were told.  Discovery of a Lie reveals the Truth that you might otherwise never know about.  In this way, every discovered Lie points to the Truth.  You may not know what the truth is but you know that the Lie you have been told is not the truth and that there is truth to be known somewhere that refutes the Lie you were told.  This is very basic stuff but its fundamental to understanding.  This is the foundation of knowing what the truth is. Find the Lie first and then find the Truth exposed by it.

How do you find lies?  How do you discover that something you have been told is the truth is actually a lie?  How would you even know?  The answer is in Anomalies.

What is an Anomaly?

An Anomaly is an incongruity or inconsistency. In the context of the Truth, an Anomaly is something which exists in reality which exposes that a stated truth might be a Lie.  In other words, an Anomaly is something which should not exist if a stated Truth is the actual truth.  If the Anomaly can be proven to exist in reality then the Anomaly exposes a stated Truth might be a Lie. Sometimes it takes only one big Anomaly to prove that a stated Truth is a Lie.  Sometimes it takes a lot of little Anomalies to prove a stated Truth is a Lie.  Either way, Anomalies expose Lies.
It is time for a real world example of this concept to demonstrate it and bring awareness to the uninitiated and I want to do this with Convid 19.
First, it is important to know what the stated Truth about Convid 19 as presented by the main stream media and the world governments so we can examine it for Anomalies.  In the following paragraph I do this:
Convid 19 is a virus that originated in China caused by people eating Bats.  It was unforeseen by anyone. Before the first cases of it were seen Wuhan China, nobody had any knowledge about Convid 19. Nobody knew about it before these first cases.  It just came out of nowhere and then it spread all around the world from China to infect people in every country.  It has caused tremendous death around the world.  It is a naturally occurring (not engineered by man) world crisis. For purely altruistic purposes, governments and health industry leaders such as Bill Gates are rushing to vaccinate everyone against this totally unpredicted disease so we can save humanity from it.
The above paragraph is the stated truth about Convid 19 according to the main stream media and all the governments of the world.  If you agree that this is an accurate statement of the Establishment position about Convid 19 then I can now reveal the Anomalies that expose this stated truth to be a Lie.
Anomaly One:  Event 201 simulated global pandemic 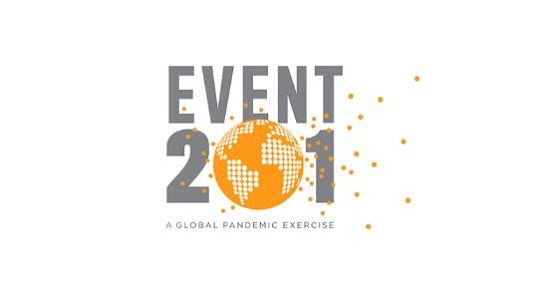 In my explanation about Anomalies I said that sometime all it takes is one big Anomaly to expose a stated Truth as a Lie.  In the Case of Convid 19, Event 201 is that Anomaly.  What is Event 201?  Here are some relevant facts about it that I invite you the reader to research so you can verify that what I am saying here is fact and that I am not just trying to pull your chain.
Event 201 was a simulation of a global pandemic conducted by Johns Hopkins Center for Health Security in partnership with the World Economic Forum and the Bill and Melinda Gates Foundation conducted on October 18, 2019 in New York City.
Event 201 simulated a global pandemic very similar to what was seen in reality with Convid 19 less than six months after Event 201.
How a simulation or Drill is turned into Reality by the Establishment (video link): 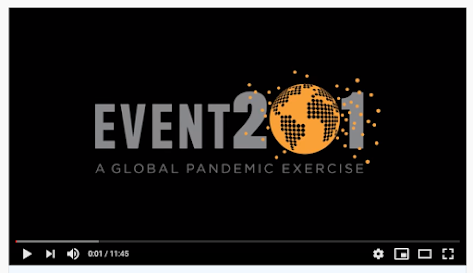 Scenarios covered in Event 201:
Governments implementing lock downs worldwide.
The collapse of many industries.
Growing mistrust between governments and citizens.
A greater adoption of biometric surveillance technologies.
The desire to flood communication channels with "authoritative" sources and to eliminate contrary messages.
The breakdown of international supply chains.
Mass unemployment.
Rioting in the Streets.
I can and probably will say a lot more about Event 201 but here is the thing for any thinking person to consider.
1. A global corona virus outbreak has not been seen in the entire history of the world before 2020.
2. Just last year, a simulation was held of a global corona virus outbreak by among others the Bill and Melinda Gates Foundation.
3. Less than six months later a global corona virus pandemic suddenly appears out of nowhere for the first time in the history of the world that in many ways mirrors the simulation.
4. The Bill and Melinda Gates Foundation that conducted the simulation is providing the solution to the world in terms of vaccinations that the Bill and Melinda Gates Foundation is directly involved with.
An informative link to connect all the dots:  https://plandemicseries.com/
One would have to be brain dead not to see the huge Anomaly in that but there are many more Anomalies about Convid 19 which I plan to cover.  After I am done, no Sheep reading this will have any excuse for being deceived about Convid 19 any longer.
Anomaly Two:  Vaccinations used for Covert Population Reduction
According to Bill Gates, Vaccinations can be used to reduce the world's population.
“The world today has 6.8 billion people. That’s heading up to about nine billion. Now if we do a really great job on new vaccines, health care, reproductive health services, we could lower that by perhaps ten or fifteen percent.”
Click on the image below to hear it from his own mouth: 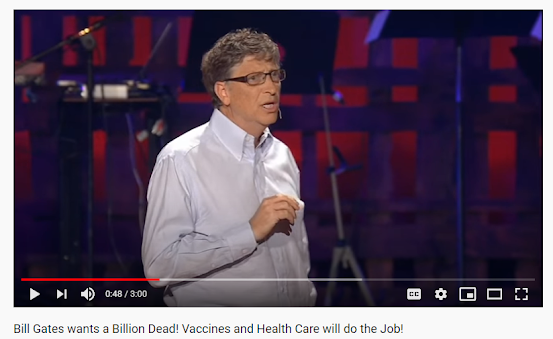 I just want you to take a moment and ask yourself the question, how would vaccinations lead to population reduction?  There are only two ways this could happen.  Either the vaccination unnaturally terminates the life of the host or the vaccination interferes with the ability of the host to procreate and have children.
That sounds so Orwellian and evil that nobody could imagine that vaccines would be used to prevent people from having children without their knowledge but look at what has already happened with the Tetanus vaccination in Africa:  Clink the link below.
‘A mass sterilization exercise’: Kenyan doctors find anti-fertility agent in UN tetanus vaccine
'This WHO campaign is not about eradicating neonatal tetanus but a well-coordinated forceful population control mass sterilization exercise using a proven fertility regulating vaccine.'
Kenya’s Catholic bishops are charging two United Nations organizations with sterilizing millions of girls and women under cover of an anti-tetanus inoculation program sponsored by the Kenyan government.
“We sent six samples from around Kenya to laboratories in South Africa. They tested positive for the HCG antigen,” Dr. Muhame Ngare of the Mercy Medical Centre in Nairobi told LifeSiteNews. “They were all laced with HCG.”
"This evidence was presented to the (Kenyan) Ministry of Health before the third round of immunization but was ignored.”
Additionally, really pay attention to what Bill Gates says in the above video about the need to bring carbon dioxide emissions for the entire planet down to zero.  Just think about that.  How would you ever do that with billions of people on the planet who are using services every single day just to live?  You would not.  The only way you would ever bring emissions down to zero is to hugely reduce the population of the planet and reduce services for those remaining people back to the stone age.  So what is Bill Gates' final solution for getting carbon dioxide emissions down to zero?  Ask yourself that question.
Anomaly Three:  Non Convid 19 deaths are being classified as Convid 19 Deaths
In this Anomaly, deaths due to causes other than Convid 19 are being classified as being due to Convid 19. In other words, deception is being used to make the public believe that a lot of people are dying because of Convid 19 when in reality this is not the case.  A lot of people have been pointing this out.  Here are some posts that indicate this: 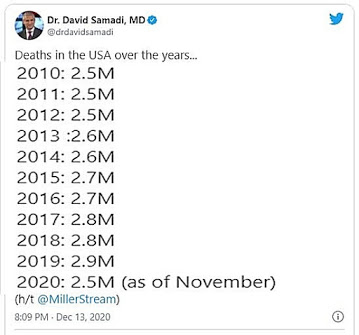 What reason would they have to lie about the death count from Convid 19?  That's a no brainer. To make the public fearful of dying from Convid 19 so that they want to take the vaccination against it.   Convid 19 is all about getting the public to take the vaccine.  They really really really want you to take that vaccine.  Are you paying attention yet?
Anomaly four:  Convid 19 Test Kits distributed world wide as early as 2017
https://www.stopworldcontrol.com/2017-covid19-testkits.pdf
https://web.archive.org/web/20200905210427if_/https://wits.worldbank.org/trade/comtrade/en/country/ALL/year/2017/tradeflow/Imports/partner/WLD/nomen/h5/product/300215
This is an Anomaly that blows the myth that Convid 19 appeared in the world naturally in 2019 out of the water.  It is proof of a deception planned and carefully orchestrated years in advance to get everyone in the world vaccinated.  Its very very important to them that you be vaccinated.  Its so important that they are using blatant deception to do it.  Wake up little Sheeple.
More to Come
Posted by No longer a Trump supporter at 11:17 AM