FALSE WORLD EXPLANATION:  John, Patsy, Burke and JonBenet Ramsey attended a Christmas Party at the Boulder CO home of Fleet Russell White Jr. and his wife Priscilla White. At around 8:30 to 9:00 PM the four members of the Ramsey family left the Fleet White Jr. residence to go back home, merrily passing out Christmas presents to neighbors along the way. After arriving at their home, they put JonBenet to bed sometime before midnight. JonBenet was murdered inside her home by an unknown person sometime late on December 25, 1996 or early in the morning hours of December 26, 1996. Who murdered Jon Benet inside her home is unknown to this day.  Some say that an unknown intruder snuck into the Ramsey home, murdered Jon Benet and then snuck out again. Others say that a member of the Ramsey family committed the murder inside the home.  Some say that John Ramsey was the murderer.  Others say Patsy Ramsey was the murderer.  Others say that Burke Ramsey was the murderer.  This murder remains unsolved to this day.

There are three possible scenarios that I see to explain he death of JonBenet at this party:

Scenario one: Fleet White Sr was sexually abusing JonBenet Ramsey. John Ramsey, who was JonBenet's father and handler was applying sexual asphyxiation techniques to his daughter to make her feel sexual arousal as she was being sexually abused. John Ramsey had learned these techniques from Macky Boykin through an earlier association with him.  Something went wrong as he was applying these techniques to his daughter and he unintentionally strangled her to death.

Scenario two: JonBenet did or said something to anger Fleet White Sr as he was sexually abusing her and he killed her by hitting her in the head so hard that her skull cracked open.  Maybe she started screaming and trying to get away which caused this reaction by Fleet White Sr.  He was hitting her in the head to try to control her but he hit her too hard and unintentionally cracked her skull open.

Scenario three: JonBenet's death was intentional.  Either it was a sacrifice that had been planned in advance and everyone knew about or JonBenet was purposely killed without her parents knowing in advance to punish John Ramsey for something he had done.  I have no idea what kind of transgression John might have committed to cause them to want to kill his daughter to punish him but I leave it open as a possibility. Maybe something concerning Access Graphics.

Following her death, JonBenet's dead body was transported from the Fleet Russell White Jr. home to the Ramsey residence where a fake crime scene was staged to make it appear as if the murder had taken place inside the Ramsey home.

Jon Benet Ramsey, accidentally murdered inside the home of Fleet and Priscilla White: 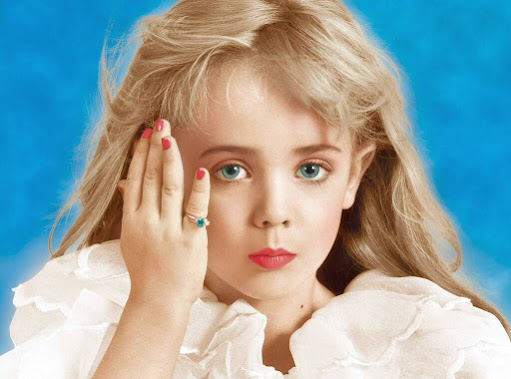 The following are a list of relevant facts supporting this:

John and Patsy Ramsey were allowing their daughter to be used by other people for sex.  JonBenet was being prostituted by her parents but mainly by her father, John Ramsey to friends, business associates and politicians in the Boulder, Colorado area as a favor or for money.

A hammer is used to control and manage children being sexually abused by adults.  They are hit in the head to correct them and make them obey because the hair hides any wounds caused by the hammer.  The hammer is used for control to force the child to do what the adult wants. But in this case, the hammer was used to hit JBR in the head so hard that it cracked her skull open.

A number of people came to the Ramsey home from the Fleet White Jr. residence in the early morning hours of 12-26-1996 to assist in the cover up and to stage a false crime scene at the Ramsey house. The staging of the Ramsey home was done by very intelligent but deceptive people for the purpose of pointing suspicion for the murder in as many different directions as possible but away from the truth. The Staging of the Ramsey home was a group effort to make it appear to be the crime scene. John Ramsey, Patsy Ramsey, Fleet White Jr. and other people outside the family did the staging of the fake crime scene in the Ramsey home. John Ramsey made a slip once and he said "There were a lot of people here at 3 in the morning".  I think this is the truth.  I think that a lot of people were at the Ramsey home in the early morning hours after the murder to help stage it as the crime scene.
A story was concocted about an unknown intruder breaking into the Ramsey home and leaving a ransom note which Patsy Ramsey would then "find" after waking up.  In reality Patsy Ramsey never slept after returning to her home from the location where her daughter was killed outside the home.  She stayed up all night helping to stage the false crime scene, etc.  The fact that she was still wearing the same clothes as the night before supports this conclusion.

Both the Boulder Police Department and the Boulder D.A's office assisted in the cover up, including the releasing of false information about the murder to conceal the truth from the public.

See this post concerning the real timeline of events.

See this post concerning a Satanic cult in Boulder, CO.

Many corrupt and/or guilty people were involved in the murder and/or the cover up. See this post.

Not everyone was in on the cover up.  There were some honest people involved.  See this post.

To go deeper down the rabbit hole of solving the JonBenet Ramsey murder, please look at this post about Nancy Krebs.

Posted by No longer a Trump supporter at 8:32 PM